In 1956 a movie was released that stirred such utter controversy that Time magazine dubbed it the “dirtiest American-made motion picture that had ever been legally exhibited.” You wouldn’t know it by its sweet and innocent title: Baby Doll. Directed by Elia Kazan and written by master of the sordid-South Williams (his first screenplay), Baby was banned by the Catholic Church for its “sexual themes.” Remember, this was a time when the Catholic Church—not the of —held immense power in .

The Catholic Legion of Decency succeeded in having the film removed from most theaters, and Cardinal Francis Spellman condemned it from the pulpit of St. Patrick’s Cathedral in , telling Catholics they would be committing a sin if they saw it! The cardinal spoke, and Catholics listened. Nearly 20 million people protested, and Baby Doll was pulled from most theaters. It was the Legion of Decency’s first-ever nationwide boycott of an American-made film produced by a major studio.

So what was so bad about Baby Doll? By today’s standards, nothing at all. Watching the film now, it’s hard to see what all the fuss was about. Here’s the basic gist. Carroll Baker stars in the title role as the young wife of the much older cotton gin owner (Karl Malden). Her husband promised Baby Doll’s dying father that he wouldn’t “consummate” the marriage until Baby Doll turned 20, and guess what birthday’s coming up. Tensions run high when the owner of a rival cotton gin (Eli Wallach) comes into town and tries to seduce Baby. 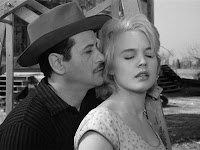 The moral police seemed to object most to a scene where Wallach’s character flirts suggestively with Baby Doll on a swing (here's the scene in question). At one point, Wallach’s hands disappear below the screen and the Legion of Decency didn’t like the looks of that. The truth, the actors revealed years later, was that it was freezing cold outside. The cast was chewing ice so their breath wouldn’t show on camera and there were heaters on the ground to keep the actors warm. So in this particular scene, Wallach’s hands were simply warming by the heater…not doing any “immoral.” What dirty minds those Catholics have...

The film is actually quite funny, and Carroll Baker is a revelation. Had Baby Doll been a hit, I think her career would have skyrocketed. Despite all the controversy and condemnation, it was nominated for four Academy Awards—including Best Actress for Baker. (She didn’t win the Oscar, but she did win a Golden Globe, as did .)

It’s amazing how far we’ve come. Today, if an institution told us that seeing a movie was a sin, there’d be lines around the block just to see it. Because now we know: Controversy makes the best films.