Is This Fair to Audrey, Ladies?

Everybody wants to be Audrey Hepburn. Well, every young starlet in Hollywood it seems. This Sunday, Vanessa Hudgens picked her Oscar dress because she said it reminded her of “a young Audrey Hepburn.” Meanwhile, Audrey wouldn’t have been caught dead in the thing. Just a day earlier, Jennifer Love Hewitt—for some godforsaken reason—decided to recreate the first scene in Breakfast at Tiffany’s…in Los Angeles. Girl got all dressed up for her 30th birthday and no doubt hired a photographer to snap shots of her doing her best Audrey impression (which, if you’ve seen her in the TV movie The Audrey Hepburn Story, you’ll know it's not very good at all).

Now it’s Keira Knightley who’s stepping into Audrey’s shoes, for a remake of the eight-time Academy Award-winning 1964 musical My Fair Lady. She’s set to play Eliza Doolittle, the unrefined Cockney flower girl who gets transformed into a lady. Knightley’s reportedly already taking singing lessons for the role. Being that I’m probably in the minority of people who actually like Keira Knightley, I’m actually pretty okay with this choice.

Oscar-nominated filmmaker Stephen Daldry (The Reader) is set to direct, and 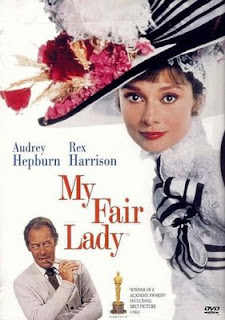 he’s planning on adding a dash of realism to the original’s spectacle. “It's all about Cecil Beaton's sets and costumes, isn't it? Which are fantastic—as are the songs, of course. It's a visual masterpiece –but it needs to be more than that. It's a clunky movie,” Daldry told The Daily Mail. Sounds like the remade film is more on its way to being closer in tone to Pygmalion, the play upon with the musical is based.

As for who will play Henry Higgins, the man who tranforms Eliza Doolittle? Rex Harrison originated the role in the film and there were rumors early on that Daniel Day-Lewis would fill the part--which would be simply fantastic! But sadly, that hasn’t been confirmed.

What do you think of this new remake and the casting news? And should we be glad that young stars have an appreciation for Audrey Hepburn? Or should these girls stop trying to imitate someone who was clearly one of a kind?

Not just any actress could put herself in the same category as Audrey and get away with it. Keira might be able to. J. Love most definitely cannot.