Hollywood is full of famous parents who spawn famous children. Whether it’s because of nepotism or just plain inherited talent, the acting family tree has branches that are widespread. Many of these family connections you might already know. Kirk Douglas is, obviously, Michael Douglas’ father. Tony Curtis and Janet Lee had Jamie Lee Curtis. Jane and Peter Fonda are Henry Fonda’s kids. Judy Garland spawned Liza Minnelli. And Drew Barrymore is part of the acting Barrymore lineage that includes acting greats Lionel and Ethel Barrymore. But what about the blood relations we young people may not know? Here are a few, FYI. 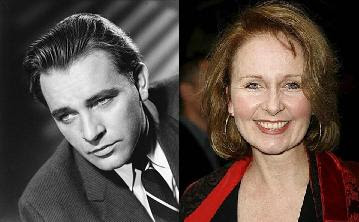 Richard Burton and daughter Kate Burton
This is one I just recently discovered. While still married to Kate’s mother, Richard had an infamous affair with Elizabeth Taylor on the set of their disastrous flick, Cleopatra. He later married and divorced Liz—twice. You probably know Kate from her role as Meredith Grey’s Alzheimer’s-ridden mother on Grey’s Anatomy. 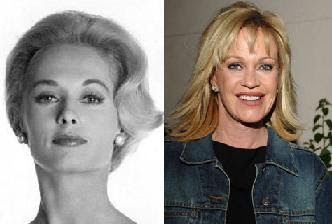 Tippi Hedren and daughter Melanie Griffith
Hedren was one of Hitchcock’s go-to blondes in films like The Birds and Marnie. Griffith has had her fair share of career ups and downs (A quick search on her IMDb page reveals she was nominated for one Oscar, for Working Girl, and seven Razzies!). She also hasn’t aged quite as naturally as mom. 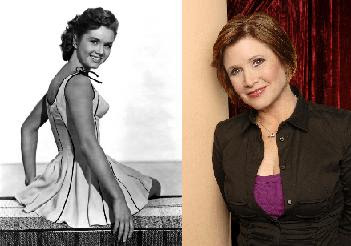 Debbie Reynolds and daughter Carrie Fisher
Reynolds made her movie debut in the classic musical Singin’ in the Rain. In yet another marriage destroyed by Liz Taylor, Reynolds’ husband (and Carrie’s dad) singer Eddie Fisher left the family for Taylor when Carrie was three. Carrie, of course, became famous as Princess Leia in the Star Wars movies. 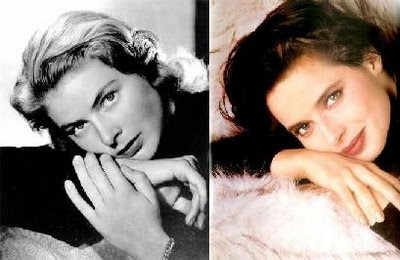 Ingrid Bergman and daughter Isabella Rossellini
Ok, so you probably already knew that one (I mean, they look virtually identical). But did you know this piece of scandalous information? Bergman began seeing Italian director Roberto Rossellini while filming Stromboli in 1949 and became pregnant with his child…while she was married to another man! Her pregnancy caused a huge scandal in Hollywood and tarnished her image. A week after her son was born she divorced her husband and married Rossellini. In June 1952, she gave birth to twins Isabella and Isotta. 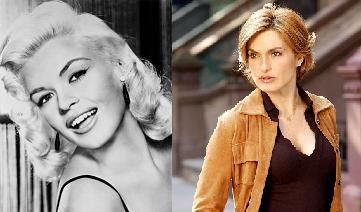 Jayne Mansfield and daughter Mariska Hargitay
This one’s no secret either, but the tragedy makes it worth mentioning. In 1967, Mansfield was killed in a car accident in Louisiana. Mariska, then three-years-old, was asleep in the backseat. The accident left her with a zig-zag scar on the side of her head. Instead of going the pin-up route like her mom, Hargitay favored serious drama and won accolades for her role on Law & Order: SVU.
Posted by Andrea at 11:30 AM