Ashlee Simpson is up in arms because people are picking on Jessica for going and getting all fat, so she took to her blog to give us all a stern talking to.

"All women come in different shapes, sizes, and forms and just because you're a celebrity, there shouldn't be a different standard. ...How can we expect teenage girls to love and respect themselves in an environment where we criticize a size 2 figure?"

Our poor, dear, sweet Ashlee. Our advocate for women everywhere. Let's not kid ourselves, shall we? It's no secret that Hollywood is easier for good-looking people. How else would we explain your nose job? Or Jessica Alba. Sure, it's possible to make it big if you're fat and/or ugly…but you better be damn talented. Or a comedian.

But let's get serious for a second. A woman's looks have always been an issue in films. Look at Judy Garland. We look back at her now as a legend, but the truth is she was constantly worried about her appearance. Part of the reason was to the same school as beauties like Ava Gardner and Elizabeth Taylor, and part of the reason was because of people like studio chief Louis B. Mayer, who referred to Garland as his "little hunchback." Her movie studio (MGM) even made her wear rubberized disks to reshape her nose (Lucky for Ashlee we have plastic surgery these days). 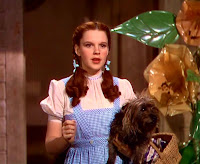 And get this: when Garland was cast in 1939's The Wizard of Oz, her dress - the famous blue checkered dress that's still worn for Halloween by little girls all over the land - was chosen particularly because it helped blur her curves. Hollywood is magical, isn't it?

Meanwhile, Jessica Simpson confirmed that she's graduated from a size 2 to a size 8 and I couldn't be happier that she doesn't feel the need to succumb to the social pressures of the business. But if The Devil Wears Prada has taught me anything - and I like to think that it has - it's that size 6 is the new 14. Jessica might be an 8 and that might be healthy. But Hollywood's never been concerned with health. And even Anne Hathaway dropped to a 4 at the end.
Posted by Your Fabulous Host at 10:30 AM

Please consider becoming a member of The Judy Garland Experience on Yahoo, the world's most exciting Judy Garland group.
The group features an ever changing supply of rare and never released Judy Garland recordings (as well as many of artists), an amazing collection of non published Garland photos, lively discussions, and more.
The membership includes Garland family members, other celebrities, people who knew and worked with Judy, authors, historians, film makers, and fans from every level. It appears that the only one missing is you! So please, stop by our little Judyville and check it out, You might find that you'll never want to leave.If you are not a member of Yahoo, no worries, it is free, and easy to join.
Here is the link to The Judy Garland Experience, hope to see you there:http://movies.groups.yahoo.com/group/thejudygarlandexperience/