Who Da Heck is DeMille? 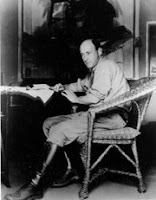 Steven Spielberg accepted the Cecil B. DeMille Award at the Golden Globes this year. It's given annually by the Hollywood Foreign Press (where would we be without Hollywood and its foreign press) for lifetime achievement in film. During his acceptance speech, Spielberg credited C.B. DeMille for inspiring him to make his very first film - a video of his train set crashing as he imitated a scene from DeMille's The Greatest Show On Earth. It was the first film Spielberg had ever seen.

But who was this Cecil B. DeMille and why is it important for us, as movie lovers, to know anything about a man who passed away 50 years ago (to the day, Wednesday, actually)? Simple: because he's just one of the greatest directors to ever live.

DeMille started his career on Broadway as an actor in 1900 before transitioning to films. This was where he truly made an impact. In 1913 he, Jesse L. Lasky and Samuel Goldwyn set up a movie studio near Los Angeles. That studio is now Paramount Pictures - the oldest movie studio in Hollywood. There he directed and produced 70 films - only six of which failed to turn a profit. (In related news, if you've ever looked at today's ratio of films released to films that make money, well… let's just say Cecil's winning percentage is the thing people in Hollywood would kill for. If they haven't already.) But his success was deserved, as DeMille was an innovator, not a follower.

Author Joel W. Findler talks about DeMille's first film - The Squaw Man in 1914 - in his book The Movie Directors' Story. He said the film, aside from being the first ever important full-length feature made in Hollywood, "accelerated the trend toward establishing California as the new home of movie-making." And what would Paris Hilton have done without that?

DeMille is often credited with making innovative developments when it came to lighting and photography - for one, he actually used artificial lighting when most others were using natural light. Who can say if film noir would have been the same had DeMille never toyed with throwing shadows.

On top of that, by hiring Wilfred Buckland for The Cheat in 1915, Kenneth Macgowan said in his book Behind the Screen: The History and Techniques of Motion Picture, that DeMille "gave Hollywood its first art director." The man helped introduce phrases like "design elements," "frame composition," and "décor" into everyday film jargon. There's Oscars dedicated to this stuff now. 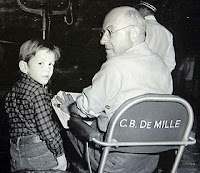 DeMille was one of the founding members of the Academy of Motion Picture Arts (abbreviated to simply "the Academy" during acceptance speeches) and he left behind a distinguished list of proteges. Spielberg, for one, but also Howard Hawks (El Dorado, Bringing Up Baby), Sam Wood (The Pride of the Yankees), John Farrow (writer: Around the World in 80 Days) among many others. He also discovered stars like Charlton Heston, who was best known for his love of guns role in DeMille's The Ten Commandments.

It's hardly an easy task to maintain working life in Hollywood, let alone relevant one, for more than a few years. Not only was DeMille the only silent movie era pioneer to make successful films up until the end of his life, but his influence still reaches us 50 years after his passing. Frankly, I'm surprised there's only one award named in his honor.

Source
Posted by Your Fabulous Host at 11:30 AM