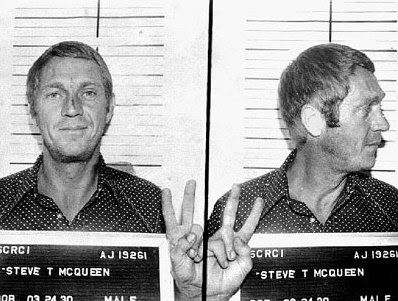 If you're like me and the 1968 Steve McQueen classic Bullitt ever came on TV in your childhood home, your parents cemented you in front of the TV to "check out this car chase!" You then spent the next five minutes scoffing because "what are you so excited about, this sucks." And, respectively, you were right.

Bullitt's car chase scene is the Donkey Kong to Ronin's Halo. The Atari to The Italian Job's X Box. A philistine version of what we have today. But consider this: without Atari, there would be no XBox. Everything has to start somewhere. Today's car chases started with McQueen and his Mustang.

When Bullitt premiered, reviews were written calling the chase scene "a terrifying, deafening shocker." Life magazine said sequence "must be compared to the best in film history." Some still believe it is - we call them "mom and dad" - but how can you blame them.

When those cars raced through the streets of San Francisco - they actually raced through the streets of San Francisco. I know what you're saying: "Uh, good point." But what you don't understand is that up until that point, action sequences were either shot on a studio lot or shot at slower speeds to be adjusted in production. Stunt coordinator Carey Lofton even told McQueen that he "knew a lot about camera angles and speeds to make it look fast." He explained ways to undercrank the cameras (it's all very technical, of course) so when it's played back it would look like high speed. That's how it was always done, but McQueen wouldn't hear of it. He didn't just want it to look like high speed. He wanted the speed itself. The result was an innovative, daring sequence that forever changed the theater's landscape.

To understand more closely what theater goers at the time experienced, I turned to my mom, who gave me an interesting insight. As she remembers it, when Bullitt hit the big screen, it was a time when theaters were changing over to larger 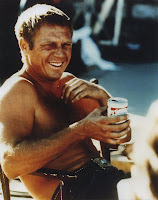 projection screens. I can only imagine that seeing Bullitt on the big screen in 1968 must have been like to see The Dark Knight on Imax (big miss if you didn't, by the way … maybe they'll release it into theaters a third time ... probably not, though).

It's important to remember what most of us have already forgotten: things that look simple today paved the very way for what we now take for granted. And we must never take anything Steve McQueen did for granted.

Posted by Your Fabulous Host at 11:59 AM

For me, Steve McQueen spraying CO2 to freeze the people eating Jello in 1958s The Blob was my first memory of him. It ran on TV very often. Gotta keep global warming in check or that thing will thaw out! Beware of the Blob! It creeps, and leaps, and glides and slides across the floor...