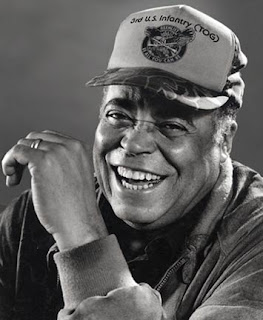 James Earl Jones was honored with the Lifetime Achievement Award at the SAG awards last night. Unfortunately, there are too many of us who only remember him from The Sandlot (forever a favorite of mine) and from that crap Martin Lawrence movie from a few years ago. Personally and professionally, he has done much more. It's in that spirit that we present you with 10 things you may have never known about James Earl Jones:

1.) Ever heard "This is CNN" or "This is Bell Atlantic?" Well, these are James Earl Jones.

2.) Surprisingly, the voice that voice overs were made for was actually silenced through much of his childhood. Jones suffered from a stutter when he was younger and coped by not talking. He was a functional mute from the age of six to 14. It was one of his high school teachers who discovered Jones' talent for poetry and, believing that forced public speaking would help the young man, made Jones read one poem aloud to the class every day.

3.) In 1969, Jones became the first established celebrity to appear on Sesame Street.

5.) Jones was a First Lieutenant in the Army.

6.) When first reading the script for Star Wars and Jones first read Darth Vader telling Luke he was his father, Jones says he thought, "He's lying. I have to see how they carry this lie out."

7.) In April of 1998, a sports commentator (whether it was during an NBA game or baseball game is conflicting) announced that James Earl Jones had died. Jones hadn't, of course. The actual deceased was James Earl Ray - the convicted assassin of Martin Luther King, Jr.

8.) Jones is also of Native American and Irish decent (like me!).

10.) A Norwegian rock banded named themselves after him: the James Earl Jones Barbershop Explosion!