We’re constantly hearing from celebs today about how the tabloids are out of control. As if this is something new. Check out this Photoplay magazine from April 1964 (personally scanned by yours truly). It’s the same gossip and speculation that goes on today. Except instead of Brad and Angelina they had Elizabeth Taylor and Richard Burton. (Alas, one thing they didn’t have was a cool mashed-up moniker like “Brangelina.” Let’s make one up now. How about Richliz? Lizard? Hmm...I’ll keep working on it.) 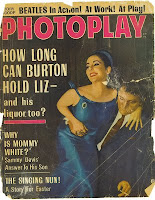 Ah, headlines back then. So blunt. So pointed. So...totally asking for a libel suit.

Click on each of the scans to read insider "evidence" of Liz and Dick's pattern of self-destruction. My favorite excerpt: "Richard Burton confronted by Liz after he's been out drinking in Puerto Vallarta with writer Budd Shulberg, snaps at her, "If you don't watch out, I'll marry him."

On the next page, Liz gets him back with this zinger: "I've been sitting here for half an hour just waiting for you to say hello to me once, you boozed-up burned-out Welshman." If this was today, there'd be many reports of Burton in and out of rehab, I'm sure.

And just for fun, here's an advertisement from the mag. Gee, how come we don't paint our shoes anymore? And why doesn't she seem to be worried about her nice, white rug?