Light the candles, sprinkle the rose petals and curl up with a nice romantic movie this Valentine’s Day. Actually, scratch the candles and rose petals because that’s just cheesy. But as long as love is in the air, why not check out these classics? (And yes, I know most others will tell you that Casablanca is the most romantic movie ever made, but I dare to be original.) 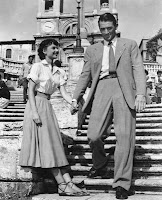 It was the first American film to be shot entirely in Italy. That in and of itself is romantic. Audrey Hepburn stars as a princess miserable with her routine life. She runs away and meets a handsome newspaper reporter, played by Gregory Peck. He finds out she’s the princess, but she doesn’t know he’s a newspaper man (See, there’s It Happened One Night again!). The two go all over Rome together and she does things she’s never been able to do before. He plans to exploit their time together and write an article, but things get complicated when they fall in love. Sigh... 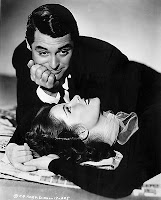 Another great romantic movie with “holiday” in the title and a Hepburn in the lead role. This one’s my favorite Cary Grant/Katharine Hepburn flick. Grant plays the hard-working idealist who’s married to Hepburn’s more traditional (read: boring) sister. Hepburn is the black sheep of the family with whom Grant clicks right away. When will they realize they’re meant to be together? This one’s a must-see if for the Grant/Hepburn rapport alone. 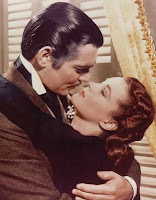 Gone with the Wind

If you’ve got four hours to kill (or if you’re single and depressed on V-Day), check out this sweeping classic. It’s an epic romance, but in a lot of ways it’s an anti-romance. Things don’t end quite so happily. We all know Rhett Butler’s (Clark Gable) famous parting words to Scarlett (Vivien Leigh) and they ain't pretty. “Frankly, my dear, I don’t give a damn.” Ouch. She’s been dumped! Watch it for the sizzling chemistry between Scarlett and Rhett, which Scarlett doesn’t seem to realize until it’s too late.