Being an actor gives a person a very big platform on which to express his or her personal views. An oversized soapbox, if you will. And actors have lots of important personal views (just sit down with any one of them). Sometimes, though, expressing such sentiments can backfire.

Just ask Jane Fonda, who is still being protested for actions she took in opposition to the Vietnam War in 1972. 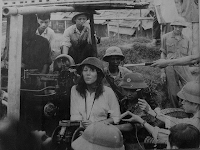 In a bid to protest the war, the Klute actress took a two-week trip to North Vietnam during which she took a notorious photo in which she straddled an anti-aircraft gun and gave her support to the Vietnam troops. She also filmed a documentary titled FTA – which stood for “F**k the Army.” The film may have flopped but, combined with the photoshoot, it solidified Fonda in one of her most famous roles: "Hanoi Jane."

Fonda expressed regret for her actions in Vietnam in 1988 when she said that she’ll go to her grave “regretting the photograph of me in an anti-aircraft gun …It hurt so many soldiers. It galvanized such hostility. It was the most horrible thing I could possibly have done. It was just thoughtless." Unfortunately, the repercussions were – and seemingly still are – far from over.

While promoting her 2005 memoir, My Life So Far, at a Kansas City book signing, 54-year-old Vietnam vet Michael A. Smith spit tobacco juice in Fonda’s face. He was arrested, but Fonda refused to prosecute. "In spite of the incident, my experience in Kansas City was wonderful and I thank all the warm and supportive people, including so many veterans, who came to welcome me last night,” she said in a statement.

And now, 37 years after the infamous picture surfaced, Fonda is still being protested. She returned to Broadway for the first time in 46 years last Saturday only to be met by Vietnam veterans picketing the Eugene O’Neill Theatre.

There’s no word of anyone being spit on, but let this be a warning to all those famous political activists out there. Not everyone agrees with your love for Hugo Chavez.
Posted by Your Fabulous Host at 3:50 PM