It Happened One Romantic Comedy... 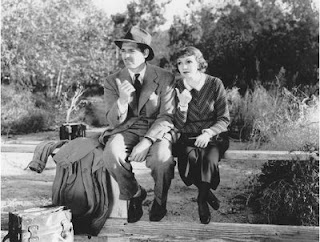 In order to kick off the week leading up to Valentine’s Day—whether you celebrate it or not—I thought I’d take a look at the movie genre that best represents the holiday. Horror movies.

I’m talking about romantic comedies. The genre that has become one big cliché, yet we still love it anyway. (Hence why He's Just Not That Into You was number one at the box office this weekend.) But clichés always start somewhere, right? In this case, it began in 1934. The film It Happened One Night is what I like to call the original romantic comedy. Its elements have been copied over and over (and over) again. Boy and girl meet cute. They don’t get along at first. More likely than not, one of them has an ulterior motive and/or is pretending to be someone they’re not. They end up falling in love (though neither admits it at first). There’s a misunderstanding. They’re apart for a few torturous scenes. They reunite in the end and live happily ever after. Ta-dah!

It Happened One Night did it all first, and did it the best. It was the first film to get a grand slam at the Oscars, winning Best Picture, Best Screenplay, Best Director for Frank Capra, Best Actor for Clark Gable and Best Actress for Claudette Colbert. Plus, it has held up remarkably well over the years. How well? I watched it with my 9-year-old brother a few weeks ago—and he liked it! That’s saying something.

Gable stars as Peter Warne, a down-on-his-luck newspaper reporter who’s just gotten fired. Colbert is Ellie Andrews, a discontented heiress who’s on the run from her overbearing father and on her way to see her new husband (with whom she had recently eloped against her father’s wishes). Both end up on the night bus from Miami to New York. Once Peter finds out who she really is, he agrees to help her get to New York, if she’ll give him her exclusive story.

Sound familiar? How to Lose a Guy in 10 Days, Never Been Kissed, and more recently, the Katherine Heigl flick 27 Dresses are just a few films that owe It Happened One Night for key plot twists—whether it’s the “reporter undercover” bit or the “opposites attract” angle. Next time you get annoyed with the current rom-coms’ lack of originality, take comfort in the fact that there was indeed an original. That one night lasted decades.

Bonus trivia: Gable and Colbert didn’t even want to make the movie at first. They thought it was crap. Matching gold statuettes surely changed their minds.

Double bonus trivia: Clark Gable’s character was the inspiration for Bugs Bunny! Gable had notoriously big ears, and there’s a scene in the film where he chomps on a carrot.
Posted by Andrea at 3:30 PM

In romantic comedies, EVERYONE is the exception to the rule! haha!