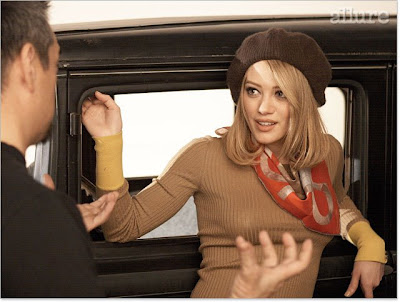 For some reason I always liked Hilary Duff. Not for her acting or singing, of course, but because she didn’t seem as big a screw-up as other girls of her generation [read: Lindsay Lohan]. I always assumed she had, if not the talent, at least the respect for her industry and people who came before her. But oh, wait. I was wrong.

Duff has been cast in the remake of the 1967 hit Bonnie and Clyde. It originally starred Faye Dunaway, who tallies classics like Mommie Dearest and both the old and 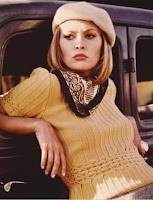 new Thomas Crown Affairs on her IMDB profile (not to mention a Best Actress Oscar for Network in 1976). With every right to have an opinion, Dunaway was taken aback by the Duff casting choice. “Couldn’t they at least cast a real actress?” she said.

When asked if she was upset about the statement, Duff said, “Not really. I mean, I think that my fans that are gonna go see the movie don’t even know who she is [laughs]. I think it was a little unnecessary but I might be mad if I looked like that now, too.”

I’m so sorry, Hilary. I had no idea that Agent Cody Banks and The Lizzie McGuire Movie were so revered. I beg of you to forgive my ignorance. And as far as Dunaway is concerned, she can just take her Oscar – and her two other Best Actress nominations (one for Bonnie and Clyde) – oh, and her sterling film reputation – and step aside. Hilary’s on the scene now. And her dozens of fans are behind her.

Post Script: Let's not fool ourselves. Faye didn't always "look like this," as Hilary so kindly puts it. We hope she has the sense to age as gracefully as Dunaway has. Then again, when you only have looks to rely on, things can go downhill fast.

Duff's interview with E! below:

Posted by Your Fabulous Host at 2:56 PM