It will really be difficult to find a much more beautiful woman that Vivien Leigh, who brought us one of Hollywood’s most renown characters: Scarlett O’Hara. Her life, however, began much farther away – in more than one sense of the word.

Ms. Leigh was born in Darjeeling, India as Vivien Mary Hartley in 1913. Her parents stayed there throughout World War I, and moved her back to England when she was six. While getting the convent education that her mother so desired, Vivien was taken by said mother to London’s famous West End during a visit. It was then that Leigh’s decision to become an actress took seed.

Her first British film role didn’t come until 1935, however--after marriage and a child with her first husband (imagine a woman trying to pull that off today). Of course, Leigh’s biggest break came in 1938 when she traveled to the States to see her new love, Laurence Olivier. It was here where she was asked to screen test for Gone with the Wind. Enter Oscar Award, Hollywood career and, in my opinion, the most prestigious of honors: today’s On the Marquee’s Siren Centerfold.

Gentleman, I give you Vivien Leigh.
In her most famous role 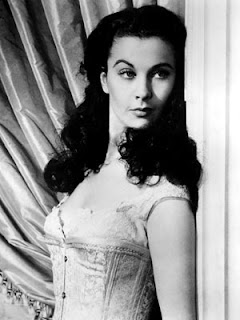 Source
Posted by Your Fabulous Host at 3:36 PM