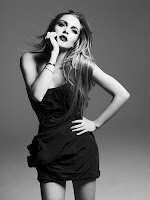 Breaking news! Lindsay Lohan gets a Marilyn Monroe tattoo; sadly remains irrelevant while doing so. Linds inked a particularly bland Marilyn quote onto her waist last week after her much publicized split with DJ Samantha Ronson. "Everyone's a star and deserves the right to twinkle," it reads.

Please feel free to laugh out loud—I know I did. To be sure, Marilyn wasn’t the brightest bulb, but certainly Linds could have dug up a more clever quote than that! What it amounts to is yet another attempt by Ms. Lohan to show her devotion/admiration for the destructive star. Guess she feels like they are kindred spirits because of their tabloid troubles and personal drama. Last year, Linds recreated (or at least tried to) Marilyn’s famous nude 1962 photoshoot for New York magazine. And she’s not the only young Hollywood actress with some Marilyn ink. Transformers babe Megan Fox has a truly hideous Marilyn Monroe head slapped right in the middle of her forearm.

Sure, Marilyn was glamorous, but she was also tragic. Let’s hope all this ink is to remind these Hollywood hotties of what fame can do to them if they’re not careful.
Posted by Andrea at 9:14 PM

You definitely put a new spin on a topic thats been written about for years. Great stuff, just great! mengobati radang usus