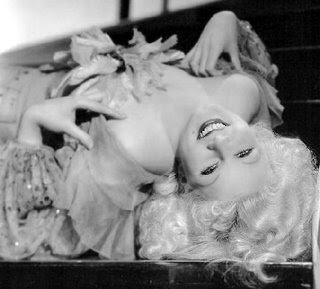 Did you know that the 1930’s had sex symbols, too? Oh, I know, I was just as shocked as you. But it’s true. Enter Jean Harlow. Sadly, Harlow suffered poor health all throughout her childhood and she died at a young 26-years-old. But in her short, 10-year career she made 36 movies and had a big enough career to land her at Number 22 on the American Film Institute’s list of the “Greatest American Screen Legends.” Harlow was also the first woman to have a cover on Life magazine.

But that’s not all. Harlow managed to ignite two phenomena that are still relevant in popular culture today.

It’s true. First off, before Harlow, Hollywood producers cast mostly dark-haired women. Once she hit the scene, peroxide sales in the States skyrocketed. You can't hit up a single Bon Jovi concert these 70-something years later without seeing swarms of black roots.

There’s hardly been anyone more worthy of to be named one of our Siren Centerfolds. In fact, she should have been the first. Regardless, here’s the “Original Blonde Bombshell,” Jean Harlow...

Source
Posted by Your Fabulous Host at 4:15 PM

that second picture is amazing.