Downtown with Butch and Sundance 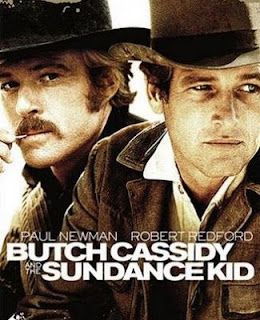 It’s Tribeca Film Festival time in good old NYC, and your very own On the Marquee bloggers were running all over downtown this weekend, press badges in hand. On Saturday we managed to get Spike Lee to give us a grunt and a one-word answer (what a guy) and saw Robert De Niro breeze by. And on Sunday we had a pleasant chat with Gilmore Girls’ Alexis Bledel (love her) and My Girl’s Anna Chlumsky (yes, she’s all grown up now and back in the movies) as they strolled the red carpet.

But of course, my highlight so far was something you didn’t need special permission to attend. It was Friday's free outdoor screening of Butch Cassidy and the Sundance Kid! Picture this: a theater set up right off of the Hudson River, gorgeous spring weather, the sun setting over the city, and Paul Newman and Robert Redford robbing their way through the West. Does it get any better? 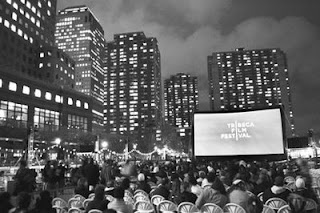 The special screening was in honor of the film’s 40th (!) anniversary, and more specifically Tribeca was honoring Oscar-winning screenwriter William Goldman. Goldman’s colleagues, including Tony Gilroy (the Bourne movies, Michael Clayton, State of Play), were on hand to sing his praises and Mr. Goldman himself was there to say a few words and introduce the film. (Hey, did you know that Goldman also wrote the screenplays for The Princess Bride, All the President’s Men, Misery and Marathon Man?) Quite a career.

So in honor of Goldman and his brilliant words, I thought I’d highlight some of my favorite quotes from Butch Cassidy and the Sundance Kid.

“Boy, I’ve got vision and the rest of the word wears bifocals.” – one of my favorite movie lines, probably ever.

“Who are those guys?” – what would this movie be without this oft repeated line?

“What could they have here that you could possibly wanna buy?” – Sundance to Butch after Butch suggests you could get more for your money in Bolivia

“Think you used enough dynamite there, Butch?” – Sundance to Butch after he blows up an entire train car

The two thieves don’t say much, but when they speak, it’s gold. Plus, seeing the film again made me realize how much I really, really, really don’t want anyone to remake it. Leave a good thing alone. And if you haven’t seen this flick, do it. No matter where you see it—outdoor festival or not—it’ll be one of remember.
Posted by Andrea at 10:48 PM