The Clearview Theater in the Chelsea neighborhood of Manhattan has a series called “Chelsea Classics.” It’s hosted by famed (and fabulous) drag queen Hedda Lettuce, who you may have seen on Project Runway and The Tyra Banks Show, and shows classic films on the big screen every Thursday night (Saturday this week for some reason, but who’s paying attention anyway). This week’s film: Whatever Happened to Baby Jane starring Bette Davis and Joan Crawford.

Andrea discovered the hidden gem and so we ventured out for some sushi and psychosis and we've both agree that there's no way we're not going back. Who cares if we were the only straight ones in the house! For 10 bucks we got a stand up routine from Hedda, the chance to win fab prizes like boy butter (we hadn’t heard of it, either, but we’re pretty sure it has something to do with the disclaimer, “Pre Show for Mature Audiences Only”), and the unique experience of viewing a classic with commentary from everyone’s favorite drag queen. To add to the ambiance of the night, the audience is encouraged to follow along by shouting out their favorite lines (I was pleasantly surprised by how much that didn't annoy me). I couldn’t imagine any other way to first see the 1962 film about family, about pride and about dreams…all of which have gone terribly terribly wrong.

The plot reads like so: Baby Jane Hudson (Davis) was a child star who overshadowed her sister Blanche (Crawford). Baby Jane then becomes an alcoholic while Blanche rises to stardom. Baby Jane cripples Blanche in a drunken, jealous rage by hitting her with a car only to end up caring for Blanche for the rest of her life while she tries to rebuild the fragments of her gin-soaked career. Reads like a Lifetime movie, no? Essentially, it’s about the jealousy of two women who couldn’t stand each other. How appropriate to cast two actresses who took unveiled swipes at each other throughout the better parts of their careers.

While I don’t understand why Davis thought Crawford was talentless (she really wasn’t horrible, and she’s a good crier), I must admit that Davis does steal the show. If you’ve never seen Baby Jane, you can imagine Davis’ performance like that of Jack Nicholson in The Shining: an absolute, terrifying, sick fall into insanity played so well that all you can do is laugh at the brilliance of the role. Davis is - hands-down - my new classics obsession.
Check out the pictures below of the night: 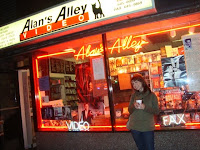 Here's Andrea outside our new find after we had sushi for dinner: Alan's Alley Video on 9th Avenue. Classics in the windows. Brilliant. From there we went on to the theater... 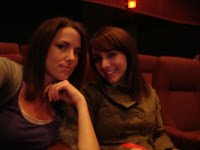 ...where we got gift bags filled with chips... 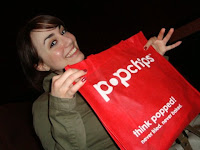 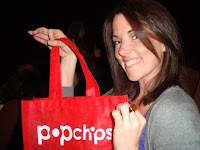 ...and got to watch Madonna videos while we waited... 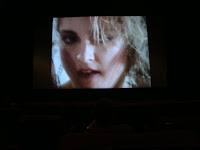 Nothing says, "This theater is in the Chelsea district," more than watching '80s-era Madonna videos in sequential order... 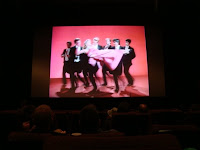 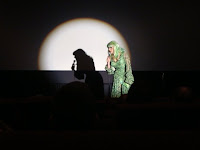 ...gave out some prizes and introduced the movie. 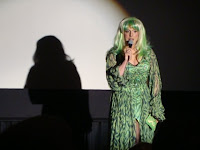 After the film, which - as I said already - was awesome, Hedda was cool enough to take a picture with Andrea and me. 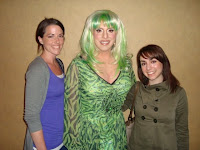 We are absolutely making this a regular event. Those of you in the New York are, check out a flick some Thursday night. Hedda hosts the 7pm showing.
Posted by Your Fabulous Host at 3:26 PM