Smarter than Your Average Woman 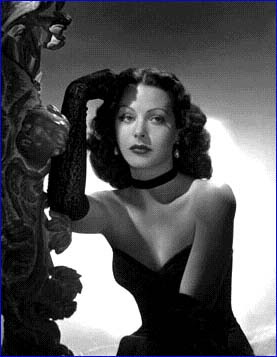 Hollywood actresses often get a bad rep. People think they’re dumb. Not model-dumb or anything that bad, but dumb nonetheless. And sure, most of them might be (we’re looking at you, Alba) , but it’s just not fair to make sweeping generalizations (unless you're talking about models).

Take Hedy Lamarr, for example. The 1940s MGM actress - famous for roles like Delilah in Samson and Delilah - was not only beautiful…chick was a scientist! True story. We know this, of course, because Rachel Weisz is allegedly being considered to play Lamarr in an upcoming indie film about the undercover scientist’s life. Face Value will focus on Lamarr’s private life as an early pioneer of what would eventually bring us cell phones and internet and all that stuff.

I’m not a fancy scientician or anything, so bear with me as I cut and paste the following words from The Hollywood Reporter. Lamarr helped “to create a method of changing frequencies – known as frequency-hopping – that became a forerunner to modern wireless communications.”

Positive side note: Face Value is being directed by Amy Redford, Robert’s daughter. Andrea and I are very excited.
Posted by Your Fabulous Host at 3:43 PM