The Dog Days of Davis 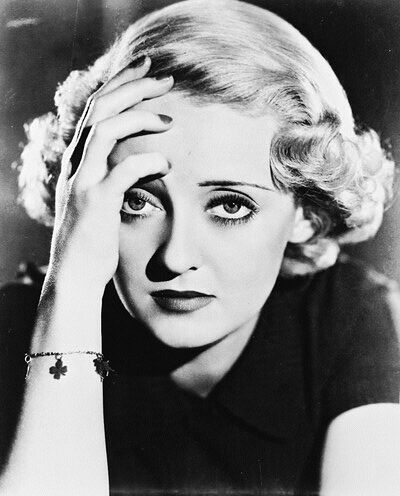 Often considered the “The First Lady of the American Screen,” Bette Davis wasn’t exactly known for her looks. She even said herself, “Hollywood always wanted me to be pretty, but I fought for realism.” Despite that, though, Davis molded her career and garnered a lot of acclaim thanks to her talent.

So if you’re a fan of, say, Maggie Gyllenhaal or Christina Ricci, well then you can thank Davis for that. Hell, you better thank her for Madonna, too. That chick has no looks or talent, yet she’s managed to take over the entertainment world - not to mention a small African country - out of sheer bitch power. But I digress.

Born April 5, 1908 in Lowell, Massachusetts, Davis started out on Broadway before heading to Hollywood. She did six films with Universal and headed to Warner Brothers when that contract was up in 1932. From there, it was off and running. Two Oscars amidst a six-decade career. But that’s the least of the reasons why I’ve fallen in platonic love with Davis. My love stems from her need to express her disdain towards anyone she didn’t like.

The Davis and Crawford fought for years before they were both cast to star in 1962’s What Ever Happened to Baby Jane. Davis took whatever measures she could to make Crawford feel unwelcome. She even went so far as to have a Coca-Cola machine installed on set because Crawford late husband was Pepsi’s CEO. Crawford returned the favor by wearing weights in her pockets when Davis would have to drag her across the floor during scenes.

But it gets even better (worse?). Davis had to kick Crawford during one of their scenes. She reportedly kicked Crawford in the head so hard that it resulted in stitches.

Davis didn’t always keep things behind the scenes, though. She was extremely colorful when speaking about Crawford as well. Here are just a few of our favorite quotes:

“I wouldn’t piss on her if she was on fire.”

“She has slept with every male star at MGM except Lassie.”

“Why am I so good at playing bitches? I think it’s because I’m not a bitch. Maybe that’s why [Crawford] always plays ladies.”

In a rare attempt at a back-handed compliment, Davis said that while she and Crawford have never been friends, “I admire her, and yet I feel uncomfortable with her. To me she is the personification of the Movie Star. I have always felt her greatest performance is Crawford being Crawford.”

And, speaking with class after Crawford passed away: “You should never say bad things about the dead, you should only say good … Joan Crawford is dead. Good.”

The rivalry is said to stem from mutual jealousy. Davis privately coveted Crawford’s good looks while Crawford lacked the professional acting credits and acclaim that Davis owned. But whatever the reason, Bette earned a dear place in my heart. Even though she never would have appreciated it.
Posted by Your Fabulous Host at 3:52 PM