Everyone knows who Robert Redford is. And frankly, if I found out you didn’t, I might seriously have to reconsider our friendship. But I digress. If you’ve never seen one of Redford’s movies, you’ve at least heard of them – Butch Cassidy and the Sundance Kid, The Natural, The Sting, Indecent Proposal, The Horse Whisperer, Spy Game … seriously, need I go on?

Redford’s also one of the few people who can pull off “good looking” at 72-years-old. And that, let’s face it, is a testament to his looks before you and I were even born. True story. Check out the pictures: 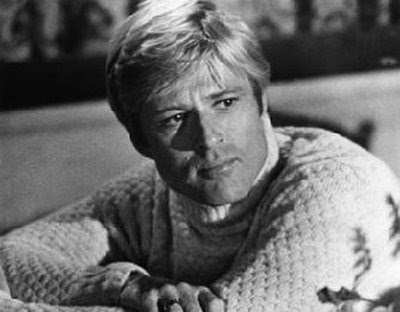 Redford was actually considered for the role of Michael Corleone in The Godfather. The role was eventually filled - and mastered - by Al Pacino.

Director Mike Nichols was looking for a blond, WASPy type to cast as Ben Braddock in The Graduate and Redford was the man. But then Nichols came to the realization that no one would believe Redford couldn't "get the girl." Enter: Dustin Hoffman.

Redford was chosen as the fourth Sexiest Star in film history by Empire magazine in 1995.

Seriously, if anyone were to play Redford in a movie, Brad would be him.

Iconic. With Paul Newman on the set of Butch Cassidy
Posted by Your Fabulous Host at 4:37 PM