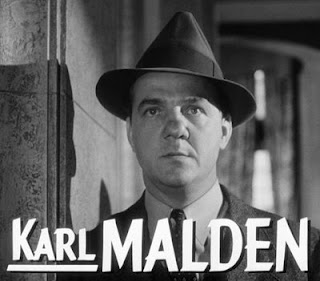 Talk about old Hollywood. Actor Karl Malden turned 97 yesterday! If you don’t know his name, you probably know his face (it’s the nose). Born Mladen Sekulovich in 1912, Malden Americanized his name and established himself on Broadway in the late 1930’s and 1940’s. He went on to work with some of the best in the biz and always seemed to turn up in substantial supporting roles—most memorably in my two favorite movies of all time, A Streetcar Named Desire and On the Waterfront. In both films he held his own his against Brando. He won the Best Supporting Actor Oscar for his role as Mitch in Streetcar (which he originated on Broadway), and was nominated for his role as Father Barry in Waterfront. As his career progressed, his roles got bigger in films like Baby Doll and Patton. He also became the pitchman for American Express in 1970s and 1980s, famously delivering the line “Don’t leave home without them!” in a series of TV commercials.

Further proving that he’s an anomaly in Hollywood, Malden avoided any personal scandals. He’s still married to the same woman he wed in 1938! (That’s more than 70 years for those who are bad at math.)

And even though he’s pushing 100, the man is still relevant. Even celebrity gossip site TMZ dedicated a post to him as early as last year! Karl Malden has proved you don’t have to look like Brad Pitt to have a long-lasting career in Hollywood. All you need is hard work and some good old fashioned character.

Happy Birthday, Karl Malden! Here’s to many more.
Posted by Andrea at 1:48 PM