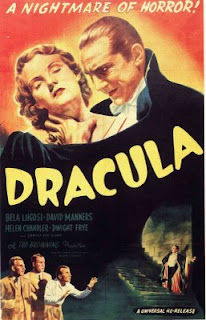 It’s the genre that doesn’t die – literally. Vampire movies have been around almost as long as film has existed, and every so often their popularity hits a fever pitch. In case you haven’t noticed, we’re in one of those surges right now. With the massive craze that is the Twilight franchise (books=fun, movie=awful) and the upcoming second season return of the awesome HBO hit series True Blood (which is technically TV and not film, but it’s 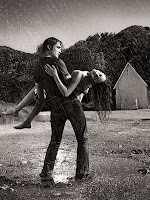 on HBO so work with me here), vamps have evolved from the Count Chocula-variety into something inherently sexy.

Hollywood’s original fascination with fangs came out of the coffin, if you will, in the 30s and 40s. Studios churned out Dracula movies designed to be horror/sci-fi fright-fests. There was 1931’s Dracula and 1944’s The Return of the Vampire, both starring Bela Lugosi, 1936’s Dracula’s Daughter, starring Gloria Holden, and 1943’s Son of Dracula and 1945’s House of Dracula, both

So when exactly did vampires go from looking like this, to looking like this (or this)? When did they stop making women faint in terror and start making them swoon with lust? Perhaps it was with Brad Pitt in Interview with a Vampire. Whenever the change occurred, we’re mighty glad it did. This is one instance where we’d have to say the new stuff trumps the old. No more bad Transylvanian accent! We prefer our bloodsuckers hot, sexy and completely cape-free.
Posted by Andrea at 2:01 PM