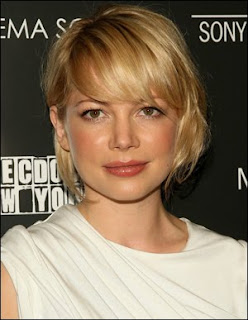 Marilyn Monroe has been the source of much imitation in Hollywood today – as we here at On the Marquee know all too well. Stars recreate her famous photos, her famous looks, even her famous scandals. Now, actress Michelle Williams has reportedly been asked to play Monroe in the upcoming film, My Week With Marilyn. The film, to be directed by Simon Curtis, will

document Monroe's time filming the 1957 movie The Prince and The Showgirl. It’s based on a diary kept by the film's assistant director Colin Clarke. (FYI: Marilyn’s difficult behavior on set reportedly drove director Laurence Olivier so crazy that he basically abandoned directing altogether after that!)

All we can say is, thank God they’re not offering the part to Scarlett Johansson. While Johansson seems to be the obvious choice (she’s got the hair, the curves and that whole sexpot thing going), we’re glad the filmmakers have a more substantial actress in mind (and before you make any Dawson’s Creek jokes, remember: Williams proved her acting chops with her Oscar-nominated portrayal of a rejected wife in Brokeback Mountain). And come on, don't you think ScarJo tries a little too hard sometimes? Granted, Williams has yet to accept the offer – but we sincerely hope she does. The movie’s due to start filming in June. Mull it over Michelle, we’ve got your back.
Think Michelle Williams is up for the task? Who else could play Marilyn? Word is, Amy Adams and Kate Hudson were also in the running - but we just can't picture it.

Source
Posted by Andrea at 2:10 PM

I think she's a pretty solid choice to portray Marilyn.

Word is, I should play the part?