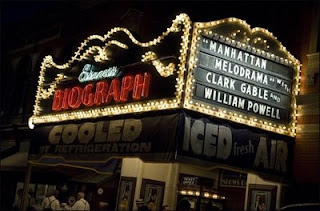 last week - not to be confused with James Cagney’s 1931 film The Public Enemy (although Cagney does manage to get a shoutout). J. Depp and Co. explore the true story of notorious bank robber John Dillinger’s downfall. The movie, which co-stars Christian Bale (sans Batman voice) as an FBI agent hot on Dillinger’s trail, fell just short of my expectations – and fell short of topping the box office (but was that any surprise considering Transformers and Ice Age: 3D?). At times a bit slow moving, Public Enemies just didn’t pack the punch I thought I would. What saves it from being a complete disappointment, though, is a clean-shaven Depp (I swear that man does not age), Marion Cotillard’s performance…and a very special little cameo by Clark Gable.

[Spoiler Alert!] It’s towards the end of the movie, Dillinger’s about to get caught, and what is he doing? Sitting in a movie theater watching Manhattan Melodrama, the 1934 flick starring Gable, William Powell and Myrna Loy. Gable plays a morally-challenged racketeer and Powell plays his friend on the opposite side of the law - a district attorney. In Public Enemies, Gable’s character resonates with Dillinger, and seeing footage from the old film certainly resonated with me. Don't you love when the past and present collide? In real life, Dillinger was gunned down outside Chicago’s Biograph Theater after seeing the movie. He got his own cinematic ending right there on the pavement. But hey, I guess there are worse ways to go. Just ask Clark Gable and his good pal Old Sparky.
Posted by Andrea at 8:09 PM

* It's the only film William Powell (Carole Lombard's first husband) and Clark Gable (Lombard's second) made together. Carole was in between marriages when this was made, and in fact was then romantically linked to Russ Columbo.

* It's the initial teaming of Powell and Myrna Loy, arguably the greatest on-screen couple of classic Hollywood (though you can also make a good argument for Tracy and K. Hepburn).

* Gable's character as a child is portrayed by none other than Mickey Rooney.