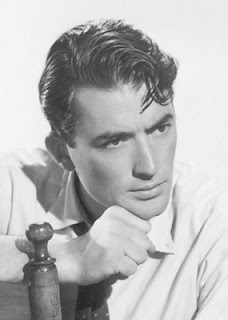 Did you know Gregory Peck’s got a grandson in the biz? His name’s Ethan Peck, he’s 22, and he’s on that new ABC Family show (that no one will watch), 10 Things I Hate About You. He’s playing the role Heath Ledger originated in the movie version. The show’s premiering tonight, actually, so if you wanna check out Gregory Peck’s lineage in action, now would be the time! You might have also seen Ethan in the Mary Kate & Ashley Olsen flick Passport to Paris, and he appeared in a movie called Tennessee, co-starring Mariah Carey. Hey, we never said he had his grandfather’s good taste. Fortunately, he did inherit the looks.
Posted by Andrea at 1:52 PM

Gregory Peck is so handsome I could cry.