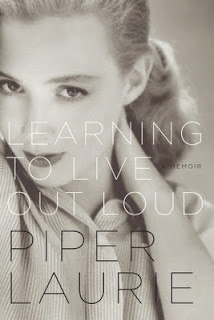 Attention people who like free things! I’ve got another book contest for you! I scored a brand new copy of Piper Laurie’s memoir (released in stores earlier this week) called Learning to Live Out Loud. It chronicles her rise in Hollywood, and her transition from contract roles to more creatively fulfilling projects. Plus there are some juicy revelations – like how she hooked up with Ronald Reagan on the set of her first movie, and later had an affair with Mel Gibson! Scan. Da. Lous. You know you wanna learn more.

Laurie is a three-time Oscar nominee, for The Hustler, Carrie and Children of a Lesser God, and had a memorable role on the TV show Twin Peaks. My personal favorite Piper Laurie role is Sarah Packard, Paul Newman’s doomed lover in 1961’s The Hustler.

I want to know what YOUR favorite Piper Laurie role is and WHY. Flip through her IMDb – chances are you’ve seen her something (esp. if you're an old movie fan)!

**Put your answers in the comments below OR tweet or Facebook them to me! I’ll pick my favorite answer NOVEMBER 11th. Winner gets a copy of the book! (Only U.S. residents please. Sorry!)**

Special thanks to Crown Publishing for providing On the Marquee with this amazing book!
Posted by Andrea at 3:34 PM

Piper Laurie is an excellent actress and it sounds like she wrote a very interesting book.

Rented the movie Tim over 20 years ago not knowing anything about it, and in the movie she does have an affair with a very young Mel Gibson.

Never thought about them having an affair off screen, but I was young and naive then and just thought it was a gem of a movie. I don't know if it was ever released in theatres here, but it had an all Aussie cast.

To me, she is like Meryl Streep, both can be put in a wide variance of roles and shine.

I loved her role in "Hesher". Her "Grandma" character was the only likable character in a film filled with the most unlikable people imaginable. Plus, she smokes a bong in it which was the most bizarrely funny thing to see. Lovely actress. Great work.