The Artist Paints a Nostalgic Picture 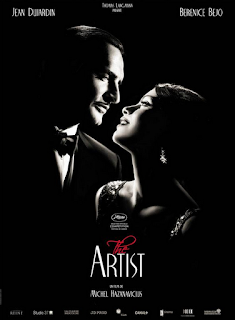 It’s black and white. It’s silent. And it’s French. But don’t let that turn you off from The Artist, probably one of this year’s most pleasing big-screen gems. What it’s lacking in dialogue, it makes up for in vibrant performances, an expressive score and deft visual cues. Part Singin’ in the Rain, part A Star is Born and part Charlie Chaplin film, The Artist gives us nostalgia without feeling stale.

It takes place in 1927, when motion picture making is on the brink of sound. Hollywood’s biggest silent film star is George Valentin (Jean Dujardin), a dapper fella who can rock a tux and charm an audience with a raise of his eyebrow. He’s got the movie-going public - and the studio - in the palm of his hand and he knows it. At one of his big premieres, he quite literally bumps into one of his biggest fans - a pretty young thing named Peppy Miller (Berenice Bejo). Their picture gets snapped together and just like that Peppy becomes George’s “mystery girl” in all the papers. 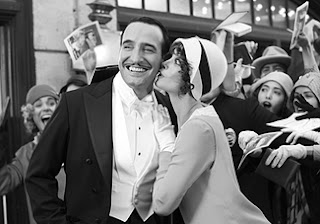 Her newfound “fame” is just the confidence boost she needs to audition as an extra on George’s latest film. George and Peppy have instant chemistry - they both can go toe-to-toe on the tap dancing floor. The seasoned actor sees the eager young ingenue’s allure and takes her under his wing. But just like in A Star is Born, the student is destined to outshine the teacher. Especially when the rise of talkies begs the need for fresh talent.

It’s not that George gets pushed out - he simply refuses to get on board. While the studios start cranking out films with the latest sound technology, George dismisses it all as a passing fad and sets out to make his own silent film. His refusal to move into the future is what ultimately makes his future a bleak one. He must forgo his pride or face living in obscurity forever.

In less capable hands, The Artist could have been a gimmicky mess - a parody of sorts. Or it could have been too, well, artsy, thus alienating the average moviegoer. But filmmaker Michel Hazanavicius has done his homework. He knows what made the classics great and he applies those elements to his own film, giving all the old timey tricks a more polished finish. There are barely any words - just the occasional title card to give context to a scene - but the film is still a rich experience. The score plays throughout, and there’s even a dream sequence where sound is used for clever effect. You never feel as if anything’s missing.

He may have been silent, but the Oscar buzz for French actor Jean Dujardin is almost deafening. He’s perfect for this part in every way. He has Old Hollywood good looks, but much like the actors of that time, his face also has character. He uses expression and body language so well that you forget he’s not saying anything at all! His George Valentin goes from cocky to desperate, and all the while you continue to like him.

Dujardin has an equally adept partner in Berenice Bejo, who plays Peppy. With a glowing smile and a buoyant personality, it’s not easy to see why Peppy becomes a big star. We begin to feel the same adoration for her as her audience in the film. 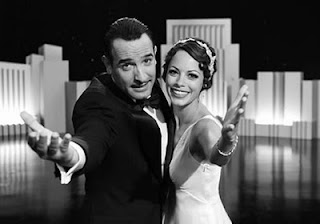 There are also appearances by some familiar American faces, but they almost seem out of place here. John Goodman plays a big-time studio exec, James Cromwell plays George’s trusted chauffeur and confidante, and Penelope Ann Miller plays George’s neglected wife. The movie’s feel was such a throwback, I really didn’t expect to see anybody I recognized. But perhaps the award for best supporting character goes to George’s dog, a trusty terrier much in the vein of Asta, the loyal pup from The Thin Man series of the 1930s or George, the mischievous dog in Bringing Up Baby. The scrappy scene-stealer was a treat to watch - and he also plays a pivotal role in the story.

My one gripe is that George’s fall from grace drags on a bit too long. It takes a while for him to fully hit rock bottom and find the strength to pick himself up again. You may get frustrated with him as he rejects Peppy’s well-meaning attempts to help get him back on track. But, as I said, the film is ultimately a crowd-pleaser, and you’ll be smiling ear-to-ear by the end. I certainly was. Sometimes, silence really is golden.

You can also find my review on TheCinemaSource.com!

But if you are a Gmail user, I think gmail email login is the website you should bookmark, in case you have email problem or want to learn some helpful tips to use email more effectively.