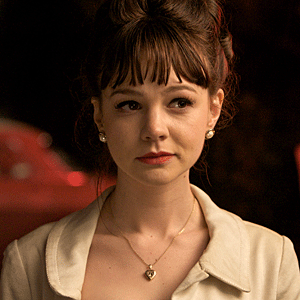 So remember last year when we told you that Keira Knightley was in talks to star in a remake of the Audrey Hepburn classic, My Fair Lady? Well, it seems Keira’s out and the newest British It Girl is in! Carey Mulligan – incidentally Keira’s co-star in 2005’s Pride and Prejudice – is now the lead choice to play Eliza Doolittle. We’re hoping this is true, because the info came straight from the mouth of the film’s writer, Emma Thompson. (Thompson didn’t tell us, of course, but she told the BBC and that’s as close as “straight from her mouth” as we’re gonna get.) However, Mulligan is still playing coy on the subject, saying at this point she just “doesn’t know.”
As Mulligan mulls her options, let us count the reasons we think she just might be the perfect choice.
As for the role of Henry Higgins, played by Rex Harrison in the 1964 film, Hugh Grant has reportedly been linked to the role. But that, says Thompson, has also yet to be confirmed. If the potential addition of Mulligan is any indication, My Fair Lady may be poised to follow its predecessor in a trip to the Oscars.
Posted by Andrea at 2:07 PM

Oooh! Fascinating. Now, I really love Keira, but, I simply could NOT imagine her as Eliza.

Carey would be a definite better choice!

Although, NOBODY can take the place of Audrey!

Totally! So glad you agree!

Carey was great in An Education. Can't wait to see more from her.

I went by your site & in the wake of going by i observed that it is extremely educational for everybody you have made truly an extraordinary showing much obliged.

She is a great choice. Ah! Lily Collins looks a lot like Audrey, but younger.
celeb networth