Way back when (December to be exact), we posted that Michelle Williams was considering stepping into Marilyn Monroe's high-heeled pumps for the film My Week with Marilyn. Since that post not only as Williams accepted the role, she's begun filming it. As of today, the first pic of Williams as Marilyn was released, and let's just say she nails the blonde bombshell look. 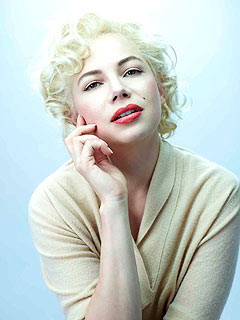 The flick, due out in 2012, focuses on the personal account of assistant director Colin Clarke, who worked with Monroe and director Laurence Olivier on 1957's The Prince and the Showgirl. Word is, Monroe and Olivier did not get along. She drove him ca-razy. So crazy, in fact, that Olivier basically gave up on directing after that. Kenneth Branagh is playing Olivier and Eddie Redmayne is playing Colin Clarke.
What do you think of Williams' Marilyn look?
Posted by Andrea at 6:48 PM

Sounds like it will be an interesting film. And Williams looks spot on as Monroe in that photo!

Thank you very much because you have always shared many new things to us
I am very happy because I can get articles that are very weighty contents
Maybe I will come back to your site. Greetings :)