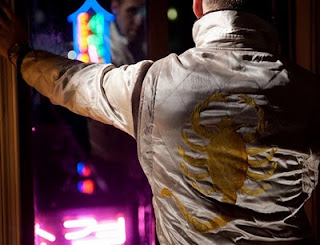 In the film Drive, which opened in theaters September 16, Ryan Gosling plays a Hollywood stunt driver by day, getaway driver for hire by night. He’s a hard-to-read loner without a name, but it could be argued that his identity is right there on his sleeve - the sleeve of his satin scorpion-emblazoned bomber jacket. The jacket is elevated to iconic status by film’s end. He never takes it off, even as it becomes increasingly tattered and bloodstained the deeper into trouble he gets. Needless to say, I was intrigued by this “iconic jacket.” The concept is decidedly retro - and totally cool. Here are my two fave examples. 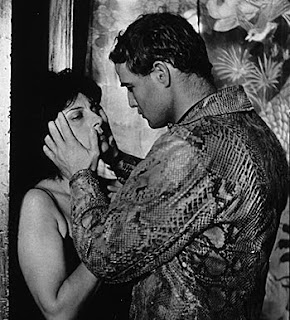 Marlon Brando as Val “Snakeskin” Xavier in The Fugitive Kind (Instead of a scorpion jacket, he had his prized snakeskin outerwear.) 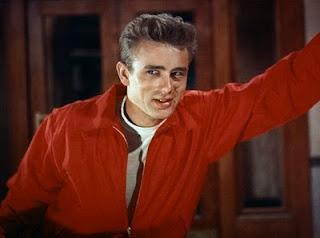 James Dean as Jim Stark in A Rebel Without a Cause (The red jacket that revolutionized rebellious teens’ wardrobes.)
UPDATE: You can now buy Gosling's scorpion jacket! Halloween, anyone?
Posted by Andrea at 5:16 PM

Labels: A Rebel Without a Cause, Drive, james dean, Marlon Brando, Ryan Gosling, The Fugitive Kind

You look fantastic! Love the jacket. It fits pretty good. I'm glad to see a fitted jacket & not an over sized one. Love your whole look. Gorgeous girl!

Love your look (the pants are fantastic) - you look so chic!

What a great post! I really enjoyed reading this, Thank you for sharing.