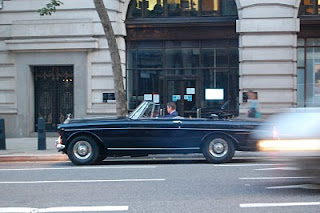 Last summer while on vacation in London, I came across a Colin Farrell movie shoot in progress. I swear I must have a radar for these things. I stood across the street, watching the dreamy Irish actor shoot his scenes in a Rolls Royce, all the while pondering what movie it was and how I could get close enough to snap a picture. I did eventually sneak a photo – albeit a slighty blurry one (see above). And I also did eventually find out what movie he was filming, and whaddaya know? It has a classic movie connection. I’m tellin’ you – radar. 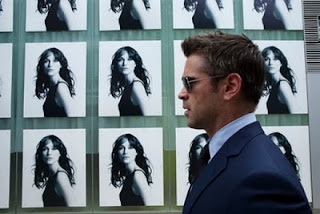 The film, called London Boulevard, is a loose take-off of Sunset Boulevard and based on the book by Ken Bruen. Instead of a ready-for-her-close-up Gloria Swanson, this film has Keira Knightley playing a reclusive former movie star. Farrell – a truly underrated actor, in my opinion - plays an ex-con who becomes involved with her. The director and screenplay writer is William Monahan, who also wrote The Departed, so expect lots of gritty tension and twisty turns.

The film doesn’t have a release date yet, but it’s something to look out for.

What do you think of the 1950 classic rebooted and set in London? Think Keira’s a little young to be playing a washed up actress? And, more importantly, should I have mauled Colin Farrell when I had the chance?