I visited San Francisco last weekend and here’s what I discovered: there are a lot of steep hills to be climbed, good food to be eaten, amazing shopping to be done, and many Full House references to be made. But even more than that - because I always have movies on the brain, even on vacation - I noticed evidence of Alfred Hitchcock’s influence on the town. I spotted old movie posters tacked up in the Castro and an entire book dedicated to Hitchcock’s San Fran films in the Ferry Market. It all got me thinking about my favorite old flicks set in the colorful California city. Here are a few that came to mind: 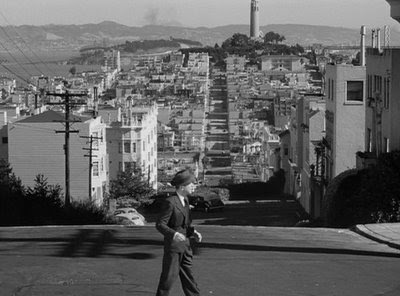 This movie is all kinds of ridiculous, and it completely sucked me in one night on TCM. Humphrey Bogart plays an escaped wrongly accused convict, and nearly the entire first half of the movie is filmed as if you’re seeing through Bogart’s eyes. Then, he gets plastic surgery to disguise his looks, so there’s a good chunk of the movie where he’s all wrapped in bandages. You may not be able to see his face through most of the movie, but you do catch glimpses of some San Fran scenery. Lauren Bacall’s apartment building can be found on Telegraph Hill.

With all those steep San Francisco hills, it’s no wonder James Stewart’s character had vertigo! This Hitchcock classic, also starring Kim Novak, includes some iconic shots of the Golden Gate Bridge, Mission Dolores and Nob Hill. Granted, it’s not my favorite Hitchcock film (not even close), but as for movies set in San Fran, it's one to see.

A substitute English teacher at my high school made my class read Dashiell Hammett’s The Maltese Falcon just for the hell of it. (Seriously, when we asked him why he picked that book for us to read, he shrugged and said he thought it might be fun.) Then, he showed us the movie. In this real Venetian-blinds film noir, Humphrey Bogart stars as a P.I. for a San Francisco detective agency investigating some mysterious murders that all revolve around one gold-encrusted statue of a bird.

It’s a silly premise, but it’s also kind of a creepy one. Birds inexplicably begin attacking people in a small town in the San Francisco Bay Area. The film opens with a shot of a San Francisco cable car crossing in front of Union Square, as Tippi Hedren makes her entrance. Word is, Hitchcock wanted to end the movie with a shot of birds swarming the Golden Gate Bridge, but it proved too expensive.